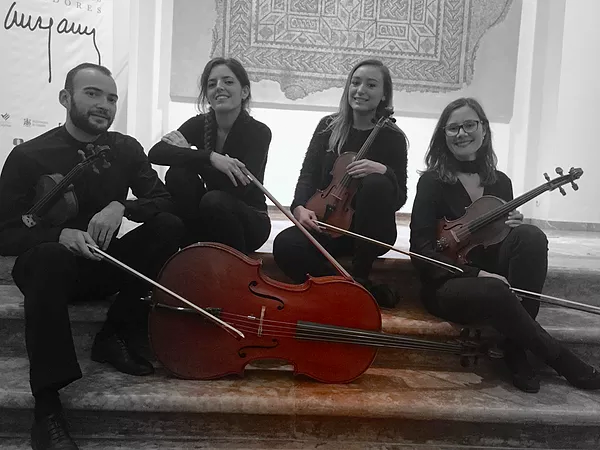 Founded in 2014, the Quartet was born from the initiative of four young musicians and their concern to explore the repertoire for string quartet. Its components completed their studies at the “Rafael Orozco” Higher Conservatory of Music in Córdoba and are currently expanding their training by combining it with their professional activity.

They have taken several courses with outstanding professors such as Alejandro Muñoz, Rodrigo García and Israel Martínez. They have offered numerous concerts in different locations in the province of Córdoba.

His repertoire is constantly growing and it includes works from different periods. Since its foundation, the Jordán Quartet faces newly created music, and it is also keen on exploring different trends and styles. They have collaborated on numerous occasions with the Antonio Gala Foundation for Young Creators of Córdoba premiering works by several of their resident composers and have participated in the «Scarpia» festival of contemporary art in El Carpio (Córdoba).

In the words of Rubén Jordán, inspiring composer of the creation of this quartet:
«It is an honor for me that such a talented group of young musicians automatically think of my music and my name to begin their journey. Throughout these years and after numerous premieres of my music, they have opened new paths around my creations thus becoming great specialists in my own music. An example of this are the premieres of “Genesis” (string quartet No. 2), “The Adventures of Prince Achmed” or “Olivares de Mancha Real”.

In addition, they do not forget the traditional repertoire for string quartet and their constant search for new music and projects is enviable.