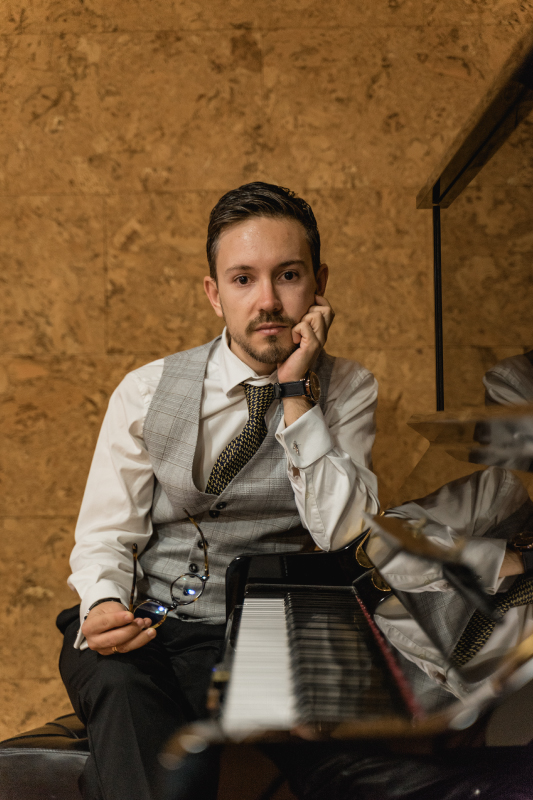 “The music of Rubén Jordán Flores, reflects already a great musical sensitivity which, together with his enthusiasm, allows us to predict a future full of success.”

He undertook saxophone and composition studies. He graduated in Composition from the Superior Conservatory of Music «Óscar Esplá» in Alicante and he got a Master in Cinematography from the University of Córdoba. He improved his composition and orchestration studies with Ricardo Llorca (professor at The Juilliard School of Music in New York, associate director and composer in residence of The New York Opera Society and member of the Queen Sofia Spanish Institute of New York).

During the 2013/2014 academic year, he participated as composer in residence and Organizer of Cultural Events at the Antonio Gala Foundation for Young Creators of Córdoba. Due to his link with this institution he assumed the position of Tutor of Musical Composition in the 2016/17 academic year.

He has participated as a lecturer in the II Antonio Gala Congress organized by the University of Córdoba and worked as an assistant professor of Musical Composition in the International Music Courses «City of Benidorm».

As a composer, he gathers in his catalogue a large number of works that cover all kinds of formations. He has received commissions from groups and outstanding formations in the national and international scene such as Ensemble SonsXXI, Helade Project, Mayrit Trio, S. Richter Symphony Orchestra of Moscow, Umbra Musicae Quartet, or the Spanish Camerata Capricho—Antonio Gala Foundation, among others.

His main field of study and work is the orchestra, and in particular his production for string orchestra. Within this field, it deserves a special mention the work done with the writer Antonio Gala and the Camerata Capricho Español — Antonio Gala Miró Foundation “Miró a mi corazón…”, perfect symbiosis between the poems, recited by Antonio Gala himself, and the music of Rubén Jordán. “Miró a mi corazón …” is made up of the pieces Miró a mi corazón…, No por amor, Nadie mojaba el aire and Sinfonía de los Jazmines.

Everything is included in the “Miró a mi corazón” Project, carried out during his stay as a fellow at the Antonio Gala Foundation for Young Creators. His recording was released in December 2014 and it was his first monographic recording.

In the field of string orchestra, and as part of his work as Main Collaborating Composer of the Spanish Camerata Capricho — Antonio Gala Foundation, he has composed “EVOCATIO”, “Las cuatro estaciones” and most recently, “Alzheimer”.
“Las cuatro estaciones”, for string orchestra and solo quartet, was the author’s second recorded work, since it was released recently within the album “8 Estaciones”. In the same way, “Alzheimer” will be the third one in the future: the composition, for string orchestra and solo soprano on the text of the poet Manuel García, is a commission of the Spanish Camerata Capricho- Antonio Gala Foundation for his next project by IBS Classical.
It also should be pointed out his latest premiere, for string orchestra and mixed choir “Lux Aeterna”, composed by commission of the Ziryab Choir of Cordoba and the Spanish Camerata Capricho— Antonio Gala Foundation, which was performed alongside Mozart’s Requiem in the Cordoba capital.

His musical production, as far as chamber music is concerned, is really varied, his three string quartets “Libertad”, “Genesis” and “Sonata Da Chiesa” being standing out compositions.

In the field of symphonic music, “El león jardinero”, on a story by Elsa Punset, for narrator and symphony orchestra, stands out. Also “Missa Refugium Peccatorum” for choir and orchestra, commissioned by the Church of Santa María Magdalena in Seville ; and the premiere, past November in a concert tour, of his “Symphony No. 2 Vida”, commissioned by the Young Orchestra of Córdoba, conducted by Borja Quintas.

His constant search for connections between new and old forms of musical expression, and his passion for theatricality and folklore have led him to inquire into sacred music and processional marches, composing works of great popular impact such as “Bajo tu amparo”, dedicated to the Virgin of Amparo of Seville; Esperanza del amor, dedicated to the Brotherhood of Christ and Hope in Monóvar (Alicante); “Bajo tu Rosario, Benacazón”, dedicated to the Virgin of the Rosary of Benacazón; “Sé siempre nuestra esperanza”, dedicated to the Macarena Hope of Seville; or the most recent “Crux Victrix”, commemorative march of the Canonical Coronation of Our Lady of Victory in Seville.
Regarding spiritual issues, he has composed the “Sub tuum preaesidium” prayer, dedicated to the Brotherhood of Our Lady of Amparo, “Bajo tu Amparo: Oración”, as well as two motets, “Sagrado Corazón” and “Huésped de la luz”. His chapel music should be mentioned: “En mí tu luz, Siempre dolorosa, Cruz de guía, Reina y Abadesa de Granada o Señor de Constantina”.

Another of his fields of interest is that of music for audiovisual media, specially his works for the director Víctor Verso and the Ciudad de la Luz Studios in Alicante, the spots made and exhibited at FITUR for the Alicante producer GDP Producciones, or advertising spots for artists Rafael Laureano and Daniel Franca, among others. Between 2017 and 2019 he was in charge of the composition of the music for “El Programa”, broadcast on OndaLuz Sevilla.

Among his latest works in the field of audiovisual media, we find the soundtrack for “The Adventures of Prince Achmed”, a Lotte Reiniger 1926 classic, considered to be the first animated film. The commission was made by the SCARPIA Contemporary Art Festival in its XV edition. The premiere was in charge of the Jordan Quartet and it was conducted by the composer himself during the screening of the film.

Due to the impact of his experience in the Antonio Gala Foundation for Young Creators, he felt new concerns related to the art world that have led him to be involved in various exhibitions and multidisciplinary projects. Among them, it is worth mentioning the participation in “Bufandas” by the artist María Morilla, in which he collaborates by designing a scarf and composing a piano piece. Also noteworthy is the exhibition curated by Álvaro Moreno: Artes y Oficios de la Semana Santa. The most recent one has been “ACORDES II”, curated by José Vallejo, in which he performs two joint works with the artist Joaquín Peña-Toro: “Acúfeno I” and “Acúfeno II”.

It is worth mentioning his participating in the Z Art Days of Montalbán with his “Tabiaa” sound installation and his collaboration with the Superior Conservatory of Music of Alicante and the stage director Rafael Ricart in the multidisciplinary show “Las aventuras de la mirada”, released during the year 2012 in “Las Cigarreras, Contemporary Culture”, in Alicante.

Currently, he is working in various research projects: the composition of his first operetta, his teaching and also the releasing of a new recording project.

“The music of Rubén Jordán Flores, reflects already a great musical sensitivity which, together with his enthusiasm, allows us to predict a future full of success.”